After reading a blog post by Terresa Wellborn about her visit to a cemetery in London this winter, "Monuments to Death and the Collection of Time," and being struck by the poetry of Terresa's prose, it reminded me of a similar lyrical passage from one of my favorite works of literature, James Joyce's story, "The Dead" and its final passage. That is the source of the following imitation. 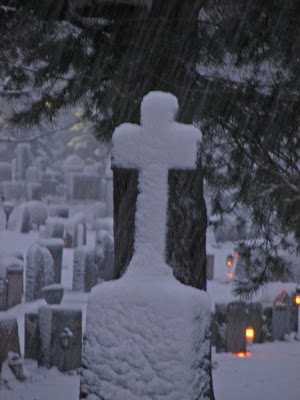 Again the snow taps lightly on the panes
in sleepy flakes all silver-dark, oblique
against the lamplight. And it is the same
across the central plain, where snow in bleak
arrest confounds the bogs and clogs the waves,
and softly settles on the treeless hills.
It falls upon the churchyard and its graves,
in thickened drifts it gathers till it spills
on crosses, headstones, on the the barren thorns,
within the chiseled recesses of names.
As it had ever snowed since we were born,
as through the universe the snowfall claims
our fainting race, displaced by warmth till bled;
it covers us, the living and the dead.

"A few light taps upon the pane made him turn to the window. It had begun to snow again. He watched sleepily the flakes, silver and dark, falling obliquely against the lamplight. The time had come for him to set out on his journey westward. Yes, the newspapers were right: snow was general all over Ireland. It was falling on every part of the dark central plain, on the treeless hills, falling softly upon the Bog of Allen and, farther westward, softly falling into the dark mutinous Shannon waves. It was falling, too, upon every part of the lonely churchyard on the hill where Michael Furey lay buried. It lay thickly drifted on the crooked crosses and headstones, on the spears of the little gate, on the barren thorns. His soul swooned slowly as he heard the snow falling faintly through the universe and faintly falling, like the descent of their last end, upon all the living and the dead."
Posted by Gideon Burton at 8:03 PM