Not Your Average Love Sonnet

Okay, this is NOT a poem about my wife -- of whom I love to write so often. It is an imitation of a parody. That's right. Shakespeare was making fun of the poetical tradition he inherited from Petrarch with all the over-the-top, lofty comparisons that were made for the idealized objects of affection. Well, I'm just taking it a step further in the same spirit, creating a persona that is certainly not me to write about a woman that is certainly not my wife. Just wanted to be clear about that. (By the way, I did a kinetic typography version of this same sonnet by Shakespeare awhile back). 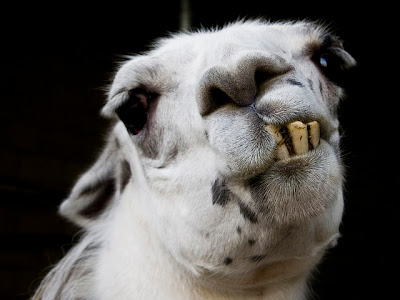 My mistress could compel the rocks to woo.
Though bald, there is a twinkle in her eyes;
So coy, her blushes flare up her tatoos,
And no one could her nasal rings despise.
She’s not the girl that papa married, yet
My father may have had some quirky tastes–
He did not like a female heavy set,
While I enjoy some handles round the waist.
Her fingers may be stained with nicotine
And though she hacks and spits upon the ground,
For her, my sworn addiction, I am keen,
Despite the blows upon me that she pounds.
We all have baggage, faults to some degree
Just give me her along with all her fleas.

My mistress' eyes are nothing like the sun;
Coral is far more red than her lips' red;
If snow be white, why then her breasts are dun;
If hairs be wires, black wires grow on her head.
I have seen roses damask'd, red and white,
But no such roses see I in her cheeks;
And in some perfumes is there more delight
Than in the breath that from my mistress reeks.
I love to hear her speak, yet well I know
That music hath a far more pleasing sound;
I grant I never saw a goddess go;
My mistress, when she walks, treads on the ground:
And yet, by heaven, I think my love as rare
As any she belied with false compare.
Posted by Gideon Burton at 11:49 PM